Rembrandt Harmenszoon van Rijn was born in Leiden in 1606. He decided early to become a painter and began an apprenticeship under Jacob Isaacz van Swanenburgh in 1621, but he actually found his teacher in Pieter Lastmann, a history painter from Amstersdam, who especially influenced his colouring. In 1625 Rembrandt began working as a freelance artist and moved to his own studio in Leiden, where a lively artistic exchange with Lastmann's pupil Jan Lievens took place.
During his time in Leiden, the young Rembrandt mainly devoted himself to history painting. The narrative images from the Old and the New Testament are characterised by a special grasping of emotions as well as an easily understandable image language and established his early success. At the beginning of the 1630s Rembrandt settled in Amsterdam due to the high order levels. At that time he painted several portraits, e.g. the famous group painting "Die Anatomie des Dr. Tulp" from 1632.
The unusual concept, the powerful narrative and the pictorial chiaroscuro was met with great approval by the painters and the bourgeoisie of Amsterdam. In 1634 Rembrandt married Saskia van Uylenburgh, who died in 1642 giving birth to his son Titus. Hendrickje Stoffels then became Rembrandt's housekeeper and lover.
The mainly small format works of that time seem to be more matter-of-factly and attest to deep inner emotions. In the 1650s Rembrandt developed a new painting technique from Tizian and Frans Hals' late style, in which the coloured areas were applied to the canvas with broad brush strokes or a spatula.
He also further developed his etching technique. Whereas he mainly used the burin in his early works, he frequently used the drypoint technique from the 1630s on. All in all, the focus of his creativity turned from dramatic group scenes to sensitive portraits.
Low order levels and Rembrandt's high expenses for the expansion of his considerable art collection led to bankruptcy and forced him to sell his house and his collection. During his last years Rembrandt painted some of his best self-portraits, which show in a sensitive manner the ageing artist's facial features.
Today Rembrandt is regarded as the most important artist of the 17th century, who - from an art historic point of view - shaped the "Golden Age" like no other with his more than 300 paintings, 300 etchings and 1000 drawings. 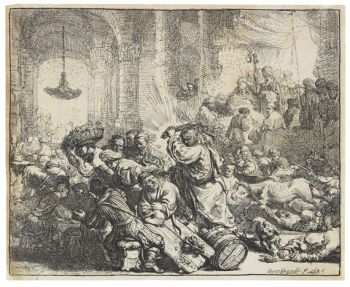 Would you like to sell a work by Harmensz. van Rijn Rembrandt?